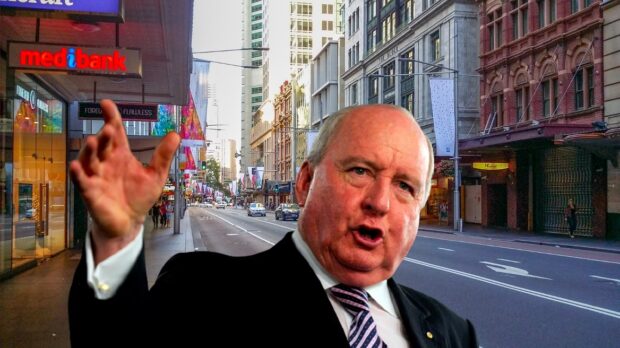 Axed from Sky News and unable to work out how to use Facebook, broadcaster Alan Jones has decided to try standing on a Sydney street corner shouting conspiracy theories in a last-ditch attempt to maintain relevance.

Beginning his live show on a CBD corner next to a Cheap as Chip store and a kebab shop, Jones shouted “They won’t silence m ..”, before a rubbish truck drove past, drowning out the end of his sentence.

Jones then cycled through a range of theories about climate change, vaccinations, COVID-19 and Sydney bus routes, while concerned onlookers called for medical attention. One woman briefly stopped to place a some loose change near his feet.

Shouting random phrases such as, “Who the hell do you think you are?”, “If you don’t come to the party, Louise, you should lose your job” and “Put her in a chaff bag!” he was largely ignored by passers by. Some tourists thought it was a busking act.

While few people stopped to listen to Jones, it is estimated that the potential foot traffic on the street corner was around 2,000 people – more than the audience of his Sky News show.