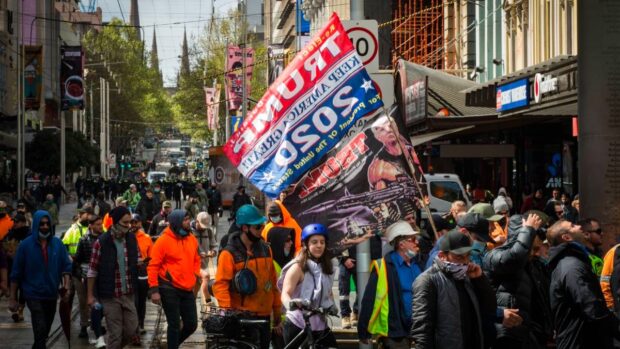 A man reciting the First Amendment while calling for the re-election of Donald Trump at the upcoming 2020 Presidential election has been forced to reassess everything in his life after someone pointed out he was in Swanston Street in 2021.

Checking street signs nearby to confirm his location, a confused Ryan Jackson, 42, was initially defiant.

“You’re fucking with me,” he said, suddenly confused to notice he had an Australian accent.

“Next you’re going to tell me that this building here isn’t the White House,” he said pointing to Federation Square. “Or that this sign that I’m holding calling for the First Amendment to be upheld makes absolutely zero sense in this particular context.

Slowly putting down his flag, the reality of his situation began to sink in. “Sorry fellas, I’ve got to go. I think I’m in the wrong place. And the wrong year”.