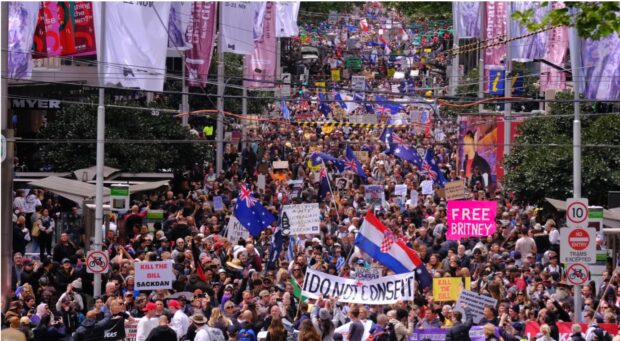 Weeks of seemingly futile protesting has finally paid off, after Victorian Premier Daniel Andrews confirmed he would release Britney Spears from the conservatorship that has controlled her life for almost fourteen years.

Many in the crowd were unaware that they were protesting against the pop-star’s conservatorship, but then most were unaware why they were there at all.

“Is that what we’re here for? I was told it was something to do with vaccinations or satanic rituals or American gun rights or something. But ok, that makes sense,” one protester said, quickly changing his ‘Trump 2024’ sign to ‘Free Britney’.

Others said they weren’t surprised to learn that Andrews was behind the conservatorship. “I always thought it was him. There’s been talk on 4chan for months about how he is actually Britney Spears’s dad. This had his fingerprints all over it,” one woman said.

Upon learning the news, the jubilant crowd erupted into a spontaneous rendition of Spears’s Womanizer before chanting the words of the second amendment from the United States constitution.