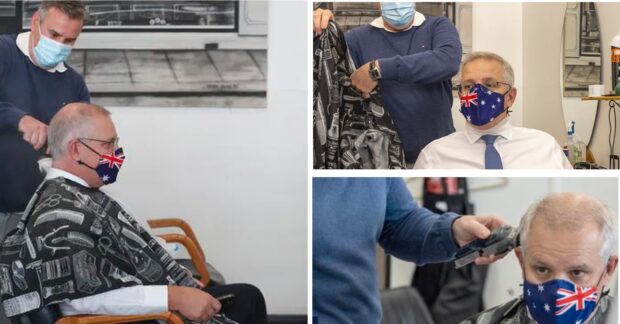 Prime Minister and all-round good bloke Scott ScoMo Morrison proved he’s no different from any other Aussie, after dropping into his local barber for a quick trim and national media photo opportunity.

“Fair dinkum, I’m just a regular bloke like the rest of you – according to my focus group-tested persona,” Mr Morrison said, asking the barber for a bit of a clean up around the edges and few different angles for the photographers.

“People in lockdown in Melbourne have been busting for a haircut after months in lockdown. So I decided to travel down from Sydney to get a quick trim myself. It was just a spur of the moment carefully orchestrated thing”.

He said he knows what it’s like to be an ordinary Aussie bloke. “A bloke needs a haircut. So I said to Jenny, I’m just going to pop 850km down the road to my local pre-vetted barber. You can see what you reckon on the news at six”.

He said unlike women, blokes had pretty simple needs when it came to haircuts. “Us blokes don’t make a lot of fuss. Just some clippers, fifty journalists and a full PR team is all I need”.

Morrison said he would be having a haircut every day between now and the federal election.