CLOSE
The Nation
Net Zero Plan: Australia’s grid to be powered by the imagination 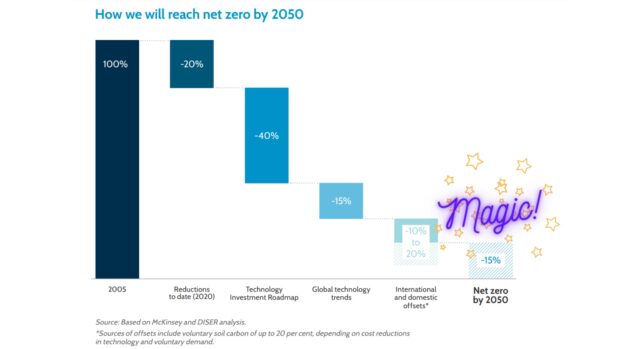 The Government has released an innovative new plan to achieve net zero carbon emissions by 2050, which involves suspending all disbelief and using the renewable powers of imagination, ‘emerging technologies’ and magic.

After spending 10 whole days writing a document that relies on the phrase “emerging technologies”, with no actual details as to what these technologies might be, the government provided clarification today, saying Australians just needed to close their eyes and open their minds to a world of fantasy and net zero emissions.

When approached for comment Angus Taylor, the Minister for Industry, Energy and Emissions Reduction explained, “Since we are including science-fiction in the projections, we thought we wouldn’t rule out a complete fantasy. We are consulting with experts in the field like J.K Rowling and David Copperfield to see if they know any spells or tricks to make carbon disappear”.

The Coalition’s plan also relies heavily on carbon capture technology. Given the net zero summary uses the slogan “The Australian Way” this presumably means we’ll be capturing the carbon and holding it in detention for 600 days until it kills itself, or that we’ll be telling it to “fuck-off back to where it came from”.