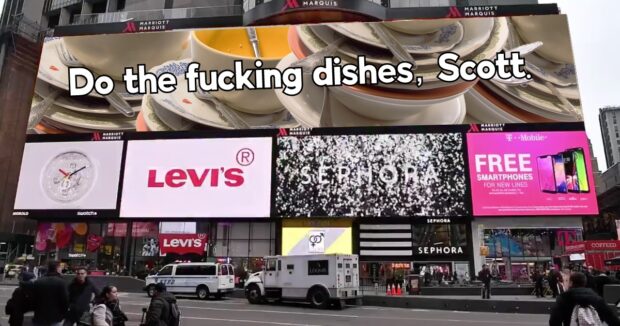 Saying it seemed like the only way to get her husband’s attention on important issues these days, Jenny Morrison has bought a large format billboard in New York’s Times Square in the hope of shaming him into doing the dishes.

The ad, which simply read “Do the fucking dishes, Scott”, ran for ten minutes and cost $16,000, the majority of which was funded with Australian taxpayers.

Ms Morrison has been a vocal critic of the PM’s position on domestic (duty) policy, saying, “He agreed to be the one to wash up if I was the one who cooked, but there has been no effort to honour that agreement.”

She says her husband has also tried to bring forward credits from previous cleaning efforts from past years, and has made vague promises that all the dishes will be gone by 2050.

While world leaders in other countries have committed to Net Zero targets with their spouses regarding dirty dinnerware left in the sink from the night before, Morrison has been unyielding in his efforts to skirt difficult questions, often falling back on the excuse that he was “just letting the casserole dish soak.”

The billboard has already seen a change in the PM’s behaviour. Although he originally had no plans to meet with Jen to discuss their delegation of duties, he changed his mind thirty minutes after the billboard went up.

(with apologies to Dan Ilic)