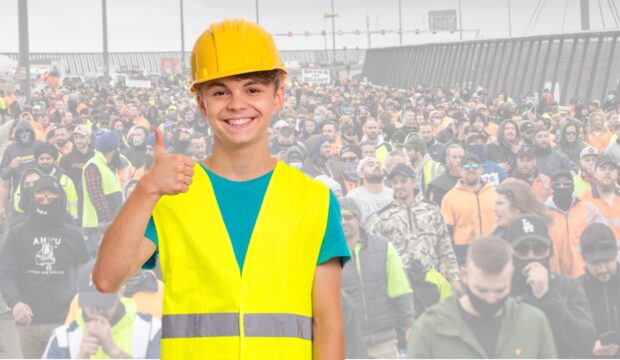 The Melbourne protesters’ plan to return to the streets ‘every day’ has come to an end already, after many tradies realised it would be easier to send an underpaid teenager into the city to be a dickhead on their behalf.

Darryl Stevens, an electrician living in Broadmeadows, described his light-bulb moment, “I realised I was on my feet for eight hours a day, three days straight, and I wasn’t even being paid for it! I know the protests are about freedom and all that. But I reckon there’s nothing freer than sending in your bludger apprentice to do all the hard stuff while you smash tinnies and play COD on the government’s dollar.”

Tradies tuned into live broadcasts to criticise the performance of their protesting workers. “Hold the fucken’ sign higher, you dickhead!” Mr. Stevens was quoted as saying while viewing live footage of his own apprentice. “A little bit of mace in the eyes and you go down? Absolute softcock.”

Apprentices were indifferent to their bosses kicking their feet up while being forced to pick up their slack, with a bricklayer-in-training describing it as ‘not much different from a normal day of work.’