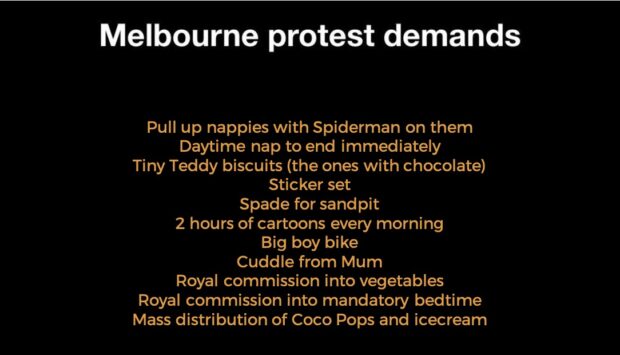 Anti-vaxxer protesters in Melbourne have released an extensive list of demands which includes pull-up nappies, more cartoon time in the mornings and an immediate end to daytime naps.

Hundreds of the little protesters, many of whom were playing dress-ups, said enough was enough. “How many more times do we have to say that we want another Tiny Teddy biscuit before we’ll be taken seriously? How much bigger do we have to be before we can get nappies with a picture of Spiderman on them like Jake has? It’s not fair!” a speaker told the crowd.

The group also called for a new bike and an immediate Royal Commission into vegetables. “They’re a trap. They’re yukky. No-one can tell me what to put in my body,” one protester said.

Breaking into a chant of “I’m not tired! I’m not!” the protesters said they wanted an end to mandatory bedtimes. One protester held a sign which read, “Why does Jasmine get to stay up later?” Another, “Josh’s parents let him watch TV on weeknights”.

Other demands included a sticker set, a new spade for the sandpit and a bulk order of Coco Pops.