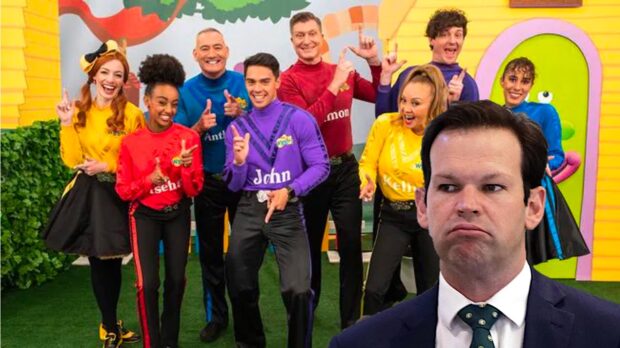 Nationals Senator Matt Canavan was found kicking and screaming on a supermarket floor today after his mummy told him the Wiggles had decided to add more cultural diversity to their line-up. It is the first time someone older than a toddler has lost their shit over the children’s group.

In a press conference today the Senator said he used to be a fan of The Wiggles, especially the song Toot Toot, Chugga Chugga Big Red Car because the Chugga Chugga “implied the car used a steam boiler powered by Australian coal”.

But the press conference took a turn when Canavan suddenly shat his nappy and threw his dummy across the room as tears washed clean streaks down his coal-smudged face.

He began to yell, “But now they’re all woke and lefty, I hate them! I hate them! What’s next, are they going to let a woman drive the big red car?”

It appears that Canavan’s Wiggles culture war goes back further than this latest slight. In 2017 he attempted to grant permits to drill Dorothy the Dinosaur for fossil fuels. The permits were denied on the grounds Dorothy had not died and gone through the million-year breakdown required to convert her into crude oil. Canavan reportedly responded by complaining Dorothy was an “inner-city latte-sipping, eliteasaurus who doesn’t care about Australian jobs”.

Following Canavan’s latest meltdown, Barnaby Joyce has unexpectedly found himself as the most adult person in the Nationals Party and later this week will literally put the matter to rest by letting Canavan have a botty and a nap after a big day.