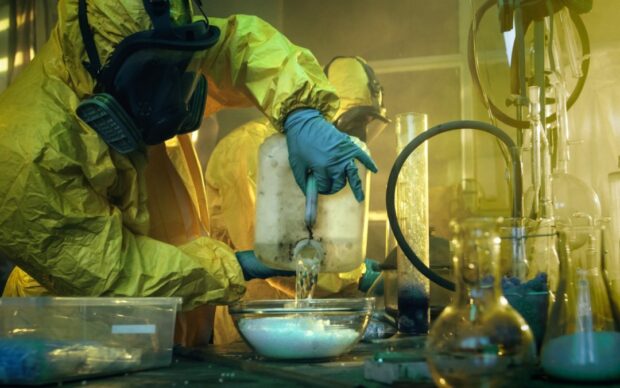 With some states warning they will run out of Pfizer vaccines within days, Health Minister Greg Hunt has taken matters into his own hands, buying an RV, heading to the desert and cutting the remaining doses with P2P and baking soda to ensure the current stash lasts as long as possible. He said Australia would have 10 million new doses by Monday.

Wearing a full-body suit to protect himself from the fumes, Hunt defended his plan, saying anyone who disagreed with him better back the fuck off. “I’ve got some lab equipment from the local high school, I’ve secured a barrel of methylamine and I’m just mixing everything together now. I’ve always said we’d have enough vaccines, and if you have a problem with how we’ve got them then you better keep that to yourself or you might find yourself in this barrel,” he said, removing his mask for air.

He said it had been a successful first cook. “I’ve tripled the output already. Not sure why it’s all come out blue though”.

Hunt said Australians could expect to see the new look Pfizer in circulation within the next few days. “I can announce today that we’ll have 10 million new doses of Pfizer by Monday, and a further 20 million by August. Just make an appointment with your local GP or dealer. There will be enough for everyone who wants one”.

The Health Minister said he had a contingency plan in place should the country still run short of the vaccine. “If we don’t have enough, we’ll move to phase two: ‘Jabfinder’. It’s a jab share program where one person takes a small amount of the vaccine then passes the syringe to the next person who then, in turn, takes their dose. It’s a really efficient way to get the most out of a vaccine”.