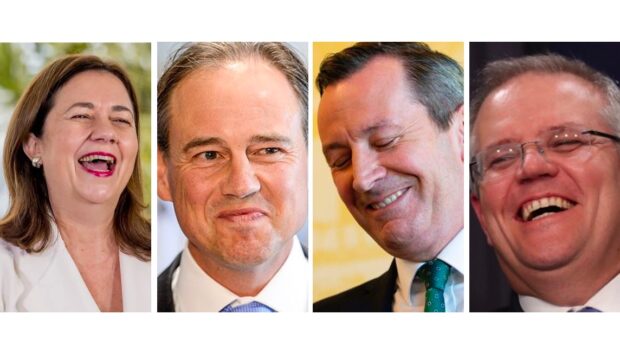 Saying it was time to ‘have a bit of fun with it’, leaders from state and federal government agreed at a National Cabinet meeting this week to use the remainder of the year to see how thoroughly they could botch the nation’s vaccination rollout.

Bored after months of COVID-related policy making, and at no risk of losing their jobs, the group said it would be fun to see if they could make the whole thing collapse.

“Wouldn’t it be hilarious if, against all odds, we could take a vaccination program that’s already the worst in the world and make it even worse,” one attendee said to roars of laughter.

“Love it. Let’s do this, I need a good laugh,” another said, asking for the group to put forward their ideas.

“What if we were to change the official vaccination policy every single day, so it’s literally fucking impossible to work out what’s going on?” one said to howls.

“And let’s not tell GPs what the new policy is so that they don’t have any idea either!” another screamed, wiping tears from his eyes.

“Guys, how funny would it be if we totally undermined confidence in vaccinations,” one person said, to cries of ‘brilliant!’, ‘hilarious!’ and ‘count me in!’

From there the ideas came thick and fast.

“I’ll make sure we never quite have enough vaccinations available”

“I’ll say I personally need to get a certain type of vaccine because I might need to go to the Tokyo Olympics!”

The final idea was met with squeals of laughter, “I’ll get vaccinated myself and then four months later release a document that uses the term ‘Vaccination Allocation Horizon!”