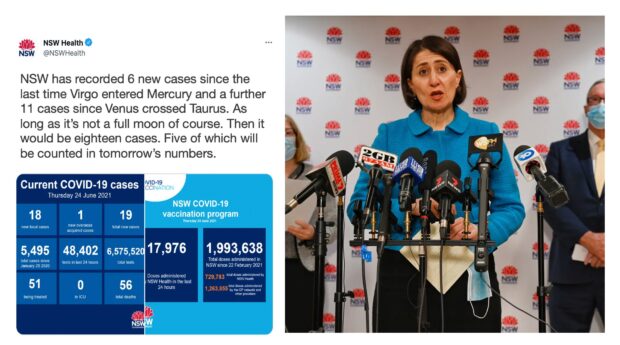 Premier Gladys Berejiklian has finally revealed the reason behind NSW’s strange COVID-19 data reporting structure, saying it is based on the same astrological analysis used to write horoscopes.

“It’s seven cases since the last time Virgo entered Mercury and a further eleven cases since Venus crossed Taurus – as long as it’s not a full moon of course. Then it would be eighteen cases, five of which will be counted in tomorrow’s numbers. So you just take that number and add the number of days since Saturn aligned with Pisces and you have your total figure. It’s really all quite straight forward,” she said.

Berejiklian passed to Dr Kerry Chant for further clarification. “You might think that telling the public how many people are infected is as simple as counting them, but it’s far more complex than that.

“Firstly we can only release figures on a given day if that given day happens to be in Sagittarius AND a Thursday. If Venus is in alignment with Jupiter, well, forget it. If it looks like a go-er, then we simply multiply it by 17. Even a layman could understand that doesn’t merit a lockdown.”

As Sky News reporter Nick Scaffold pushed for a demonstration, Ms Berejiklian tipped some Metamucil into the cauldron and briefly closed her eyes, uttering what appeared to be an incantation, before a puff of smoke protruded from her left nostril.

“See? There? There!” she screamed, pointing excitedly on the handkerchief at what could have possibly been interpreted as the number 5. “There are tomorrow’s results!

The NSW Fisheries spokesperson, who for some reason was also at the conference, suggested, “With the sun and Mercury moving across the sky from the solar seventh house, we have concluded that only 50% of Rugby League players should be allowed onto the Ruby Princess at any given time. Any more window lickers than that and we risk another Joh Bailey Hair Salon incident.”

Clear communication specialists were unavailable for comment at the time.