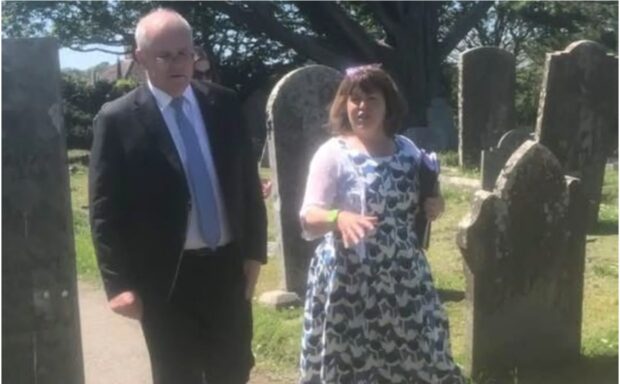 A family history side-trip during the G7 summit in England has confirmed that Prime Minister Scott Morrison was created during a brainstorming session at a Sydney advertising agency in the late 1990s.

Family research experts say initially the plan was to create a prototype for the quintessen­tial ‘fair-dinkum Aussie Dad’. But after a few beers, the ad creatives thought it would be more fun to make him a dick­head. No-one knows where the weird Christian bit came from.

Further research can reveal that after spending thirty years as a regional salesman at a small photocopy distributor, Morrison became head of Tourism Australia. He oversaw the ‘Where The Bloody Hell Are You?’ campaign, widely regarded as one of the least successful in the organisation’s history.

The campaign showed that Morrison lacked judgment, pos­sessed questionable money-management skills and had a tendency to misread the mood of the nation. The Liberal Party snapped him up immediately.

Morrison entered parliament in 2007 and was moved to the shadow front bench a year later. But it was in 2012, when Tony Abbott chose Morrison to implement his ‘stop the boats’ policy, that the member for Cook’s political career really took off. Having so successfully stopped people coming to Australia during his time as head of Tourism Australia, Morrison was considered the perfect man for the job.

In what was to become one of the most effective campaigns to dissuade asylum seekers, Morrison organised the ‘Where The Bloody Hell Are You?’ campaign to be shown in the Mid­dle East, Africa and South East Asia. The flow of people to Australia immediately dried up.

After 13 months as Immigration Minister, Morrison moved to a new role as Social Services Minister. Morrison said that after months working with asylum seekers, it was nice to be working with humans again.

In one of his first speeches as Social Services Minister Morrison said he wanted to search the sewage of welfare recipients to see if he could find traces of drugs. Close friends at the time said it was the clearest sign yet that Morrison’s drug addiction was spiralling out of control.

In 2017 Morrison famously brought what appeared to be a piece of coal into question time, passing it around to fascinated colleagues. It was later confirmed to be Rupert Murdoch.

In August 2018 Morrison defeated Peter Dutton in a leadership spill to become Prime Minister. Wanting to bring a bit of gravitas to the role, Morrison immediately started wearing board shorts and surfing caps.

Scott Morrison is a member of the Assemblies of God Church. Services are known to include speaking in tongues, where a simple English phrase like ‘Love thy neighbour as thyself’ can be translated as ‘use thy neighbour’s place as a prison to lock up small children’.