CLOSE
The Nation
‘How To Look Busy While Doing Absolutely Fuck All’, By Scott Morrison 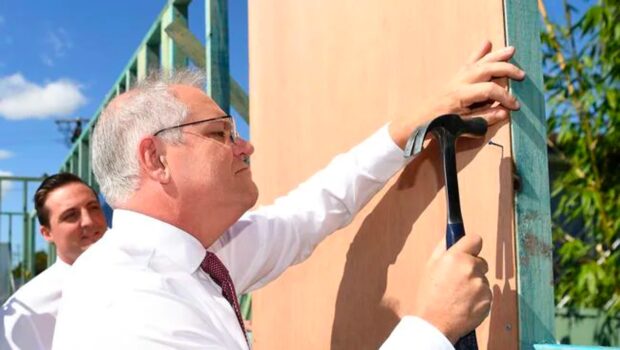 One of the things I’ve learned since being in the top job is that Aussies love a do-er. Someone who rolls their sleeves up, gets their hands dirty and chips in to get the job done.

Sounds like a lot of hard work if you ask me.

Much better to just give the impression you’re working and get paid half a mil a year to do sweet FA. Here are a few tips I asked my secretary to type up.

Nothing says ‘busy’ like a professionally-styled photograph of a 55 year-old man doing barre at a meat processing plant.

If you think you’ve done too many cheesy photo shoots of yourself playing rugby on an 8-metre earth mover or hammering a nail into a F-15 fighter jet, then you haven’t done nearly enough. Aim for at least five a day – if you miss a day people will start to question why you haven’t built a quarantine facility even though you’ve had 16 months.

Put on a hard hat

There isn’t a single situation that can’t be made to look like you’re a dedicated, untiring workhorse with a florescent yellow hard hat.

Signing a document you haven’t read? Put on a hard hat. Heading off on holidays again? Hard hat. Denying you knew anything about a rape that took place 50 metres from your office. Definitely hard hat.

One of the things I’ve realised over the years is that people are always asking you to DO things. Like putting out the bins or having a climate policy. But a little trick I learnt early on is that if you just say you’ll do it, people will usually take you at your word. They’ll often even print a glowing front-page feature piece about it.

It means you never actually have to do anything about climate change. And Jen will put out the bins.

Every couple of months or so it’s worth rolling out an old announcement and making it sound like it’s something entirely new.

This is especially effective if it involves spending money on some sort of program. I’ve promised $50 billion to the arts sector since I’ve been PM, simply by repeatedly re-announcing a $2,500 funding scheme from 2017.

Do you want me to put the bins out Jen?

If people question why you haven’t done anything about a certain issue, even though you’ve had over a year to plan for it, be sure to label it an issue for the states.

This works even if the issue is stipulated in the nation’s constitution as being a Federal responsibility.

Set up an enquiry

Enquiries give the impression of vigorous activity, when in fact it’s just some overpaid ex Liberal Party member printing out a templated findings report before heading off to the Tattersalls Club for a cigar.

Make sure your enquiry lasts for as long as possible – enough time for everyone to forget what the enquiry was about in the first place so they can instead concentrate on the new photo you’ve released of you eating strawberries on the back of an army tanker.