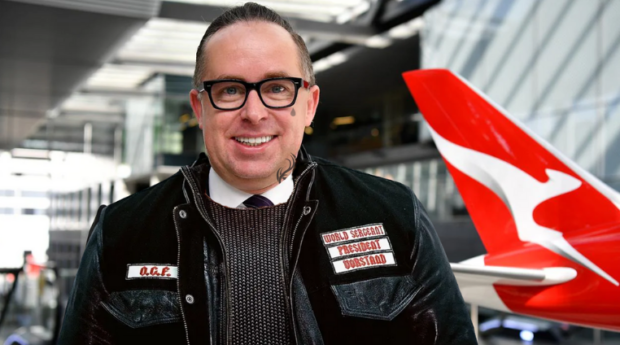 Joyce was forced to answer questions about the allegations at the media conference, which was originally called to launch a sleek new leather jacket addition to QANTAS uniforms.

“These allegations are false,” Mr Joyce said, itching his neck where a new tattoo had been freshly inked.

“QANTAS has some of the strictest background checks of any Australian airline, and I have every confidence in my newly appointed HR managers, Jimmy One-Eye, Mudpig and Brick to see that appropriate care is taken reviewing our personnel files for any discrepancies.”

Joyce said the new uniforms were already being worn by flight attendants and ground crew. “We’re also excited to announce the replacement of the baggage trucks with some chromed-out Harley-Davidson Fat Boys.”

When asked by one reporter if QANTAS shareholders would approve of this increased spending during the COVID-19 pandemic, Joyce flicked his cigarette butt at their chest before referring any further questions to his assistant, Hamish ‘The Hammer’ Wilson.