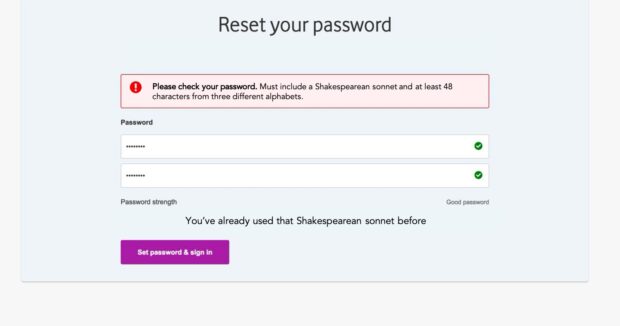 Your new password must include the full text of one of Shakespeare’s sonnets, plus at least 48 characters from three different alphabets.

Bear in mind that you cannot use a Shakespearean sonnet that you have used in a previous password and you must include at least three numbers and no more than eight, but at least six upper case letters.

Users are reminded that explanation marks can no longer be used in passwords and must be replaced by the % symbol. The word ‘love’ is also deemed a security risk and must now be replaced with an open and closed bracket. For example “O% learn to read what silent () hath writ%”.

Try to avoid passwords that can be easily guessed, such as Sonnet 18, which is pretty obvious.

Adding the lyrics of an early 90s Wu Tang Clan song is recommended, as long as they follow the form of an iambic pentameter.

Remember, never write down your password, or tell it to anyone else.

Thank you for signing up to Pete’s Petfood Warehouse.