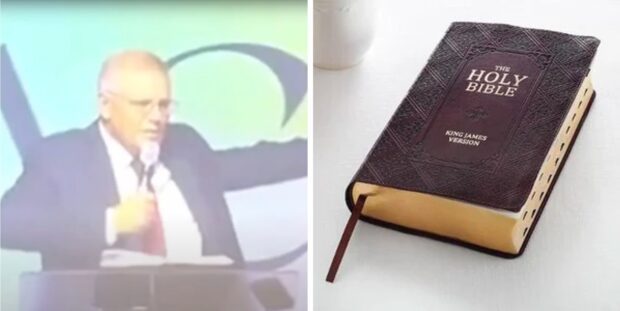 A video emerged this week of the Prime Minister claiming he has been called upon to ‘do God’s work’.

But is he really carrying out the work of God? It turns out, yes. We’ve uncovered eleven quotes from the Bible that substantiate Mr Morrison’s claim.

Luke: 5:21 – Jesus looked at the poor and the helpless and the needy, and he said unto them, ‘Unfortunately I have no money to give you because I gave a $22 million taxpayer-funded handout to Gerry Harvey’.

Romans: 8:33 – And John, who was one of the Lord’s 40 media managers, said to Jesus, ‘Lord, your poll numbers are down. Let’s set up a photo shoot of you building a cubby house for chickens’.

Mark 8:17 – The people suffered through the worst pandemic in a hundred years. And Jesus went to Bunnings.

James 2:8 – And Matthew, one of the Lord’s disciples, said, ‘God’s love is for everyone. But especially those living in marginal Liberal electorates’.

Mathew 21:12-13 – And Jesus went into the temple of God, and cast out all them that sold and bought in the temple, and overthrew the tables of the money changers. And then – furious at what they had done – he demanded they go on a six-week empathy training course, on full pay.

Corinthians 6:21 – Peter, Jesus’ disciple, didn’t like the mean things people said about him. So he sued for defamation.

Mathew 13:47-50 – Jesus told the people the parable of the three workers. The first worker called a rape victim a ‘lying cow’, but she kept her job because the government had only a one-seat majority. The second worker took a photo of a woman’s underwear, but he kept his job and was sent on an empathy training course. The third worker gave her staff Cartier watches, “And if she does not wish to stand aside, she can go!”