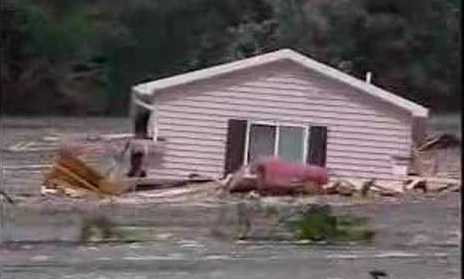 An un-renovated terrace in Marrickville (at the time of writing) has sold for $800,000 over its reserve.

Billed as having good bones with plenty of scope for improvement (STCA), the three-bedroom home was said to be in need of a new kitchen and bathroom, as well as new foundations and land.

“You won’t find a 3-bedroom terrace in Sydney for less than this,” real estate agent Hugo Tarnby told bidders, as they swam to keep up with the property.

The home, which started in the sought-after suburb of Enmore, before floating to Marrickville and then Tempe, was at times close to shops, public transport and other amenities.

“It’s close to everything, eventually,” Tarnby said. “It has 360 degree absolute waterfront views. Don’t let this one pass you by. And I mean that very literally”.

Successful bidders Jo Granton and Jeremy Peach said they were ecstatic to finally get onto the property ladder. “It’s not perfect, but it’s got great potential. Of course we would’ve loved a house that was connected to the ground, but this is Sydney! You can’t have everything.”