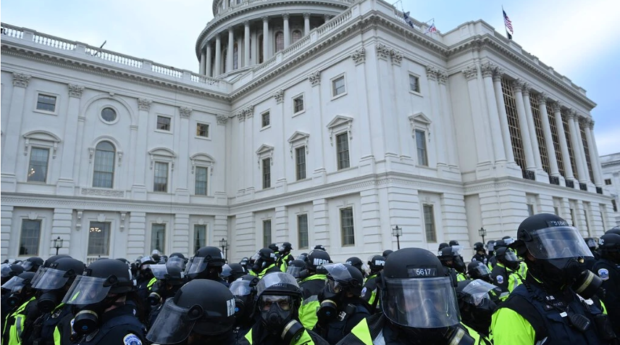 Initially refusing to intervene in a violent invasion of the Capitol Building by Donald Trump supporters, the National Guard has rushed to the scene after reports a black worker walked through the wrong entrance.

A spokesperson for the National Guard said it was now a dangerous and highly volatile situation. “We have heard reports that the man – believed to be in his 40s and of African American appearance – entered the building through a fire exit, rather than the worker’s entrance, which has put everyone in the vicinity at risk. We are not yet sure if he has a weapon, but we are working on the assumption that he does,” the spokesperson said at the scene, as armed Trump supporters ransacked the building behind him.

“Why did he go through the wrong door? Does he have an accomplice? How quickly can we neutralise this threat? This is an unstable, uncertain situation that could easily get out of control,” he said, stepping aside to allow a looter past.

Pointing to a painting of Abraham Lincoln as it was being ripped from the wall, the spokesperson said law and order was critical to American democracy. “Our forefathers and leaders have build this democracy, and we must protect their legacy”.