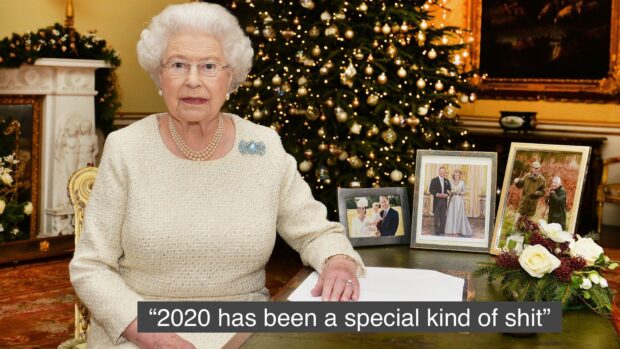 We received a leaked transcript of the Queen’s 2020 Christmas message. Here it is in full.

“Most years I would be speaking to you after a cheerful Christmas lunch shared with family, close friends and staff.

This year, however, I am addressing you after a 3-hour ‘virtual Royal Christmas lunch’ on Zoom. Jesus Fucking Christ. I’ve been through a bit in my time, but trying to fake polite conversation with your idiot family members over a shaky internet connection is a new low. If it weren’t for a fucktonne of Pimms I don’t think I would’ve made it past the entrees.

One minute Charles is banging on and on and on about his new vegetable patch. The next Harry is spinning some woke bullshit about privilege. And then of course Andrew – well, he wanted everyone to know that the 16 year-old Scotch whiskey he was drinking actually seems older in real life. Sure it does.

There were some silver linings. Meghan thought no-one could hear her for the entire lunch because of a technical issue, but it was actually because I had control of the mute button. The benefits of being Zoom host.

But apart from those rare highlights, the whole thing was a disaster. An appropriately shit end to a massively shit year.

Of course we have had trying years before. But 2020 has been a special kind of shit hasn’t it?  And no, I’m not talking about the coronavirus. Spare me. I’ve lived through a world war and ten years of Tony Blair, and you lot are having a whinge about being asked to stay at home to watch Amazon Prime for a few months? Toughen up princesses.

I remember a time when the nation had to ration food because it was being bombed every night by Nazis. Now we run out of food because some fucktrumpet thinks they can outsmart a virus by buying 400 packets of spaghetti. Idiots.

No, there are other, more compelling reasons why 2020 has been a total shitshow. My son hangs out with paedophiles, my husband is still a racist. And then of course there’s my grandson who thinks he can just fuck off to America like he’s on some kind of all-expenses-paid gap year.

And that’s before we even get to Boris Johnson. Can you imagine what it’s like to have to deal with this absolute arseclown? I used to convene with Churchill, Thatcher – people of substance. And now they send me this overgrown toddler whose Mummy forgot to comb his hair.

Which is a nice link to the Christmas story really isn’t it. Because Christmas, after all, is about the birth of a child who would go on to lead the world. And my goodness haven’t we got plenty of children leading the world right now.

So Merry Christmas. Toddle off now. I’m off to finish that bottle of Pimms and live forever”.

This is an edited extract from the 2020 Shovel Annual