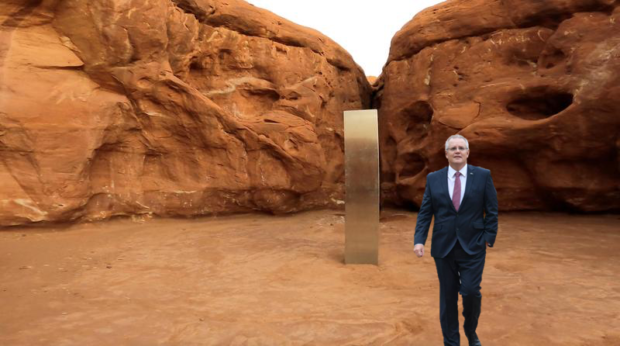 The strange mirror-like monolith that has mysteriously popped up in random locations across the world is said to be the work of Australian Prime Minister Scott Morrison.

One source close the Prime Minister said he had no doubt it was Morrison’s work. “It’s shiny, it’s slightly tacky and it deflects everything that comes into its path. It’s definitely Scott”.

Another insider said it was actually an elaborate campaign to deflect media interest away from the Robodebt scandal. “It might sound like a lot of effort to go to. But then he did orchestrate a geo-political confrontation about a meme just so he could deflect attention away from Australia’s war crimes. So I wouldn’t put it past him”.

One former staffer said it had all the hallmarks of a Scott Morrison stunt.  “It’s got Scotty’s fingerprints all over it. Literally. It’s fucking filthy. It needs a good clean”.