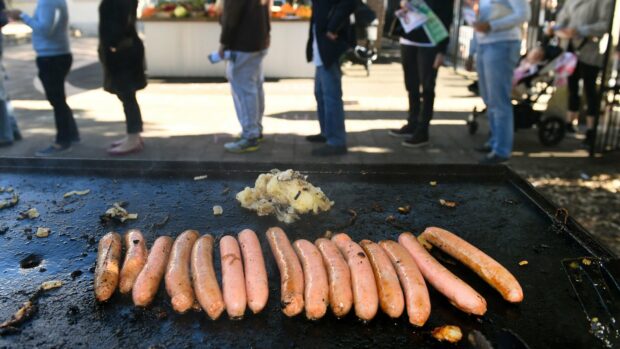 Following accusations of fraud at the US Presidential race, similar explosive claims have been made about the 2018 Australian election, with one man saying he received a sausage made from wheat gluten when he clearly asked for meat.

“My order was tampered with,” Johnno Robinson, a voter from Redfern said. “I asked for pork, I got jackfruit. Clearly it was switched out at the last minute. This is not how elections are supposed to work in Australia. It’s all a bit sus”.

Casey Bellingthwait from Perth, who also had her sausage order interfered with, said she was appalled that this could happen in Australia. “It left a very bad taste in my mouth. Actually it left the taste of textured vegetable protein in my mouth. Fucking disgusting”.

Analysts say thousands of Australians may have had their democracy sausage swapped out, either intentionally or due to poor processes.

“I’ve heard hundreds of stories from people who say they went to the polling booth with the clear intention of eating a meat sausage, only to find they’ve been served crushed walnuts in a buckwheat casing. In some cases they’ve then been asked to hand over $7.50. That’s fraud,” a spokesperson from Democracy In Action, a voter rights group, said.

“It’s pretty terrible,” Johno Robinson said. “If it happens next time I’ll probably start a riot. Not literally – that’s just a turn of phrase. Rioting would be ridiculous”.

The AEC is currently investigating.