CLOSE
World
US Election: Toddler Who Lined Up At Polling Place With Parents Now Old Enough To Vote 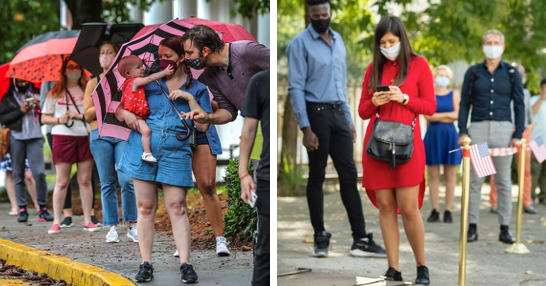 A toddler who has been waiting in a polling place line with her parents in Georgia is now old enough to vote, it has been revealed.

Chloe Sanderson was just two years old when her parents joined the back of a line at a polling place in Gwinnett County, GA. She is now 18.

“I don’t have strong memories of when we first joined the line. But Mom and Dad talk about it a lot and I’ve seen the photos,” she said, as she advanced another spot forward.

“I’ve got to say though, some best years of my life have been in this line. There have been so many milestones – like when Mom put me down for the first time because her arms were sore; my first ever kiss – with that boy from eight places back; the birth of my younger brother; the birth of my half-sister”.

She says she hasn’t yet decided who to vote for. “I need to give it a little more thought. But there’s still time – there are a few hundred people still in front of me”.