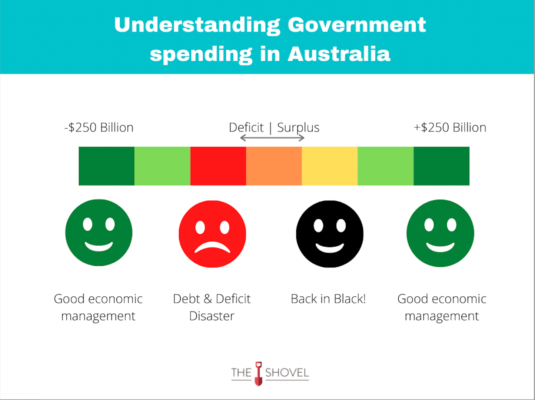 There’s been a bit of confusion lately about the difference between a government surplus and a government deficit, and how that relates to good economic management in Australia. This simple economics lesson from The Shovel explains how it works.

Back in Black (yellow section): This is a fictional scenario delivered by the Government this year, last year.

Small Deficit (orange section): This occurs when government spending is more than government revenue. This only occurs due to Labor being in Government or Opposition.

Debt and Deficit Disaster (red section): This is when spending is a lot more than income. It occurs when a Labor government is in office during a global economic crisis and is trying to avoid a recession. It is horrifically bad.

Good Economic Management (green section): This is when government spending is immensely more than government income. It occurs when a Coalition government is in office during a global economic crises and is trying to avoid a recession. It’s basically the same as a surplus, except for the bit about spending being more than revenue. It is sound economic management.