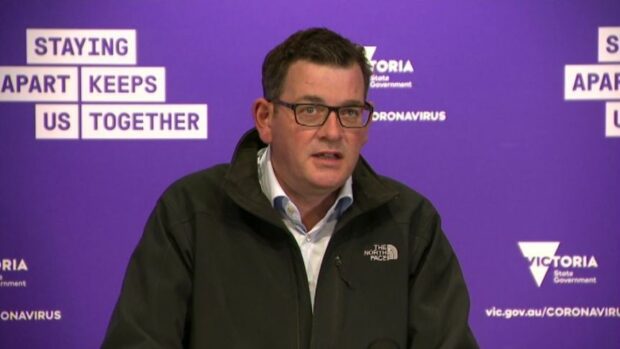 Victorian Premier Daniel Andrews’ North Face jacket has applied for the JobKeeper wage subsidy after being told it is no longer required to work until April 2021. The jacket has been noticeably absent from Andrews’ press conferences in recent days, and has been the subject of rumours about its future on the Victorian Government payroll.

Andrews confirmed the news at a press conference today.  He stated that given the economic decline brought on by the global pandemic, the government needed to reduce its wages bill by standing down unnecessary warm clothing items until autumn next year.

The North Face jacket expressed a mix of emotions when contacted for comment. It said that “On one hand it’s not a big surprise – I have friends in the industry who have been stood down this year. But I’ve got a jacket wife and young jacket children to look after – and the JobKeeper rate will reduce next week. I’ll probably apply for an early release of my superannuation just to be safe”.

The jacket also expressed disappointment that it could not leave Australia under current restrictions.  “I’d love to work for a politician in Europe or North America during their winter, but I guess that’s not going to happen without a definitive job offer”.

Andrews sought to reassure concerned Victorians that his North Face jacket was not permanently laid off. “Let me be clear – this is only a temporary measure. My North Face jacket will be back with me at my daily press conferences from April next year. I can also confirm that my trousers, shirt and suit jacket will remain employed. After everything Victorians have been through over the past 12 months, the last thing they need is me delivering my press conferences in my birthday suit”.