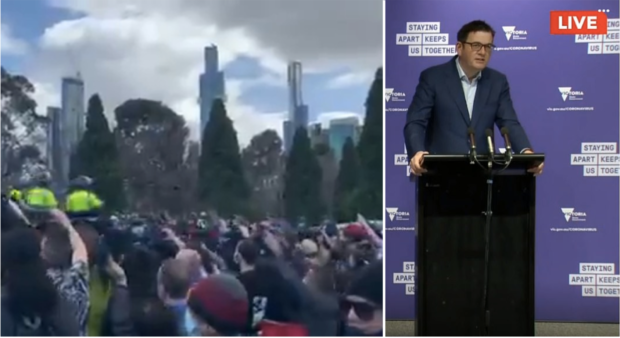 Victorian Premier Dan Andrews says he can no longer ignore the sheer volume and veracity of research that has been compiled by the state’s conspiracy theorists, and has consequently decided to end all lockdown restrictions immediately.

Saying that Victoria would skip stages 3, 2 and 1 and open up entirely, Mr Andrews said he now accepted that the ‘dandemic’ had never actually existed.

“Watching the protests unfold yesterday, and witnessing the amount of thought-through evidence put forward was quite moving,” Mr Andrews said. “The rigour of the thinking and the eloquence with which it was presented was just so convincing. These theories have been peer-reviewed many, many times at respected journals like 4-chan, so who am I to ignore them? I knew I had to reassess everything,” he said.

A spokesperson for the government also noted the significance of the Shrine of Remembrance as a protest location. “There is a very important parallel between protesters defending their rights under article 19 of the UN charter to be a bunch of circle-jerking tin-foil hat wearing idiots, and the sacrifices made by soldiers in Australia’s wars to protect our country’s freedoms. It certainly caught our attention”.