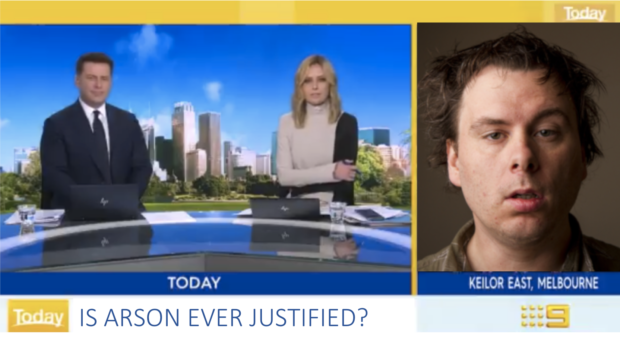 Following its interview with anti-masker and conspiracy theorist ‘Lizzy’, Channel Nine’s The Today Show has confirmed it will host a hard-hitting hitting chat with firebug ‘Rob’ about why bushfires are not as bad as some people think.

Host Karl Stefanovic said he didn’t necessarily agree with ‘Rob’s’ opinions, but believed it was important for viewers to hear both sides of the story.

“We hear a lot from firefighters. We hear a lot about the negative side of bushfires. Are there positives too? You decide,” Stefanovic said.

He said it was important to hear from a range of voices. “Rob is really passionate about this topic, and he knows a lot about it, so I think it’s fair enough that we get him on to hear what he has to say”.

Co-host Ally Langdon said they were careful to only engage with subject matter experts. “So when we want to get a deeper understanding about COVID-19, for example, we get a far-right conspiracy theorist on the show. Or when we want to understand the corrosive effects of racism in Australia, we drop Pauline Hanson a line”.

The Today Show’s producer said she had no idea how the interview with Rob would play out. “I really don’t know, but if I had to guess, I reckon Rob will say that lighting bushfires should be legalised and de-stigmatised, we’ll send out a click-bait tweet asking what other people think about the issue, and then we’ll back down, claiming we had no idea that an arsonist would ever support the lighting of bushfires. But that’s just one scenario – who knows?”.