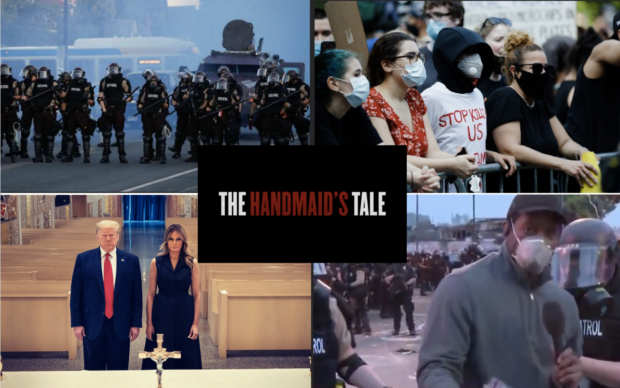 Netflix has released the much-anticipated prequel to The Handmaid’s Tale, which reveals the backstory of how the United States disintegrated from a powerful, respected democracy into the darkly dystopian ‘Gilead’ of Margaret Atwood’s famous book.

A trailer – released today – shows tanks rolling down quiet suburban streets, police shooting at law-abiding citizens and the President threatening to shut down the media. In one chilling episode, the President specifically threatens to shoot protesters.

We also learn how the Bible is used as a prop to serve the totalitarian regime, how the media is silenced, and how the government begins to change laws to gain further control over woman’s reproductive systems. In one iconic scene, ten men sign a new law restricting aid to countries offering abortion.

Critics have labelled The Handmaid’s Tale prequel as unrealistic and over the top.