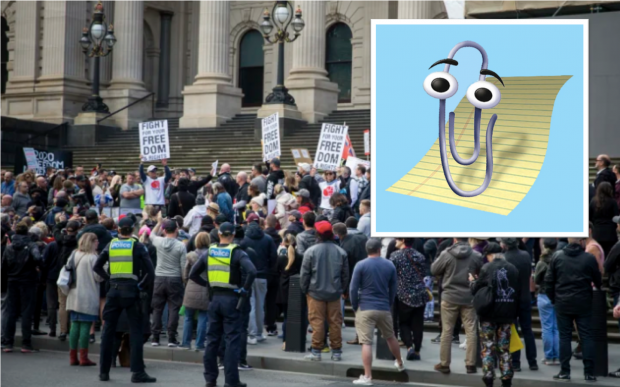 Protesters at a Melbourne rally today called for Bill Gates to be arrested for secretly inventing the COVID-19 virus, but others have pointed out that Gates was guilty of an ever graver crime in the late 1990s – ‘Clippy’ the Microsoft Office assistant.

“They’re angry about the fact that Gates has created a global pandemic that is sweeping the world – and I’m angry too. But wait until they hear that in 1997 Gates released a cartoon paperclip that would pop up to interrupt your train of thought every time you were getting into the flow of writing something”.

Graston said Clippy was “ten times” worse than COVID19. “COVID has infected a few million people. Clippy infected every fucking computer in the world between 1997 and 2004.

“And you reckon this lockdown is bad. What about when your computer was locked down because it didn’t have enough working memory to cope with an animated cartoon character dancing all over your Word document. You’re mad about this coronavirus thing? Trust me, it’s nothing compared to a plucky paper clip interrupting to ask you if you want help writing a letter”.

Graston said he remembers Clippy like it was yesterday. “I recall one time I was writing an important manifesto and the stupid paperclip pops up and says ‘It looks like you’re trying to link vaccinations to autism – do you want help determining the difference between you’re and your?’ It was infuriating.

All 500 people at today’s rally have since tested positive to coronavirus.