CLOSE
The Nation
News Corp: “We Didn’t Delete The All-Staff Email Sent By A Disgruntled Employee. It Was Burnt By Arsonists” 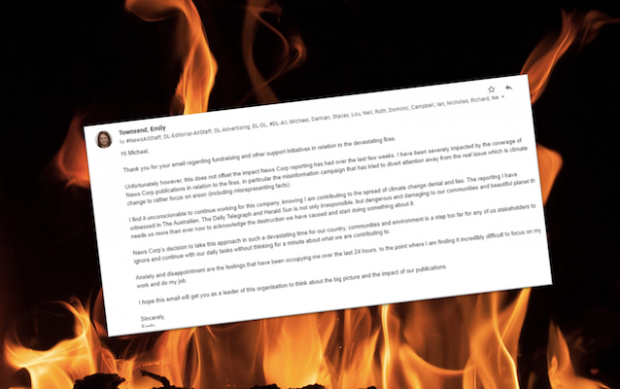 A News Corp spokesperson says it simply isn’t true that the company deleted an explosive all-staff email from finance manager Emily Townsend that criticised the organisation’s bushfire coverage, and instead claims it was the work of arsonists.

“Like most of the bushfires we’ve seen this season, this all-staff email was deliberately lit, deliberately destroyed,” the spokesperson said.

“I would point your attention to statistics I’ve misconstrued which clearly show that 88% of all of the inconvenient emails deleted off our server have been the result of arson”.

He said that the matter was made worse due to the Greens’ policy of allowing emails to bank up without being cleared. “Due to their irresponsible policies this was always going to happen,” he said.

He also denied there was a change in climate at News Corp offices following Townsend’s email. “There is absolutely no evidence of a change in climate here at all. Any internal dissatisfaction is totally normal and has nothing to do with our recent coverage”.