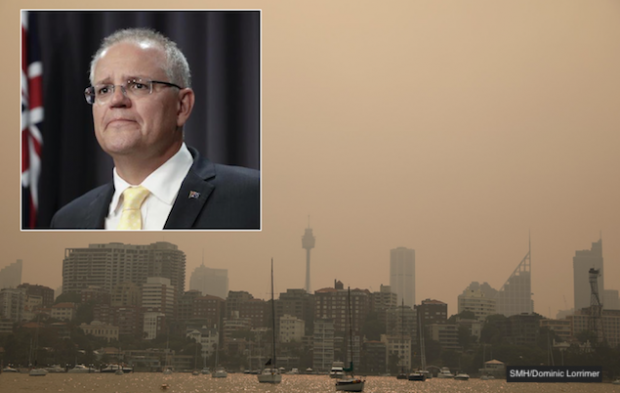 After weeks of silence Prime Minister Scott Morrison has finally responded to the smoke crisis engulfing Australia’s biggest city, releasing the second draft of a religious discrimination bill that will give religious organisations greater scope to hire and get rid off staff based on their beliefs.

As Sydneysiders suffered through the most smoke affected day yet, Prime Minister Scott Morrison said people needed practical solutions. “As you navigate your way home through thick smoke today, know that your government is doing everything it can to give religious people the opportunity to post sexist memes on Facebook,” Mr Morrison said.

With many ferries cancelled and smoke now seeping indoors, setting off smoke alarms, Mr Morrison said doctors should be allowed to refuse to perform certain medical procedures if it wasn’t in line with their religion. “This is a sensible, practical solution that gets to the heart of the issues we’re seeing right now”.

He said he was always listening to the concerns of ordinary Australians. “They say to me, ‘Scomo I just want my kids to be able to go to school today and be able to play in the playground without choking to death, and I say, ‘I hear you – soon your school will be able to fire your child’s teacher if they’re gay’.

The Prime Minister said that as people tried to make sense of the fires raging across the country, there were two words on everyone’s lips – religious discrimination. “I hear it every time I go to my multi-million dollar tax-exempt church”.

We have Christmas cards!