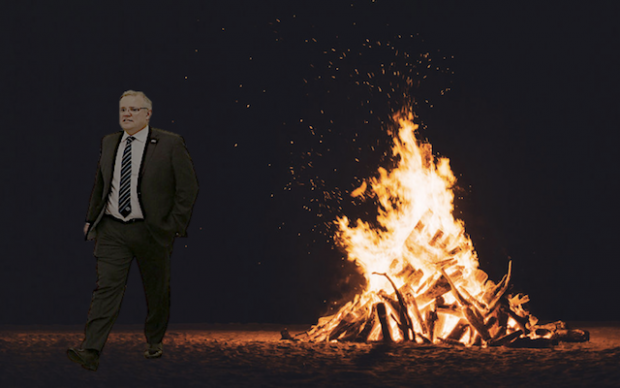 After spending more than $250 million on official government advertising since January last year, the Coalition has decided to try another tactic to get voters’ attention, with a 30 second commercial that’s just Scott Morrison setting tax dollars alight.

A spokesperson for the Liberal Party said that after developing so many official advertising campaigns over the last year, the government had totally run out of things to promote and decided actually burning money was a more efficient way to fuck over taxpayers.

“For the past 15 months we’ve been burning taxpayer money in a figurative sense, so we thought we may as well get literal and actually just burn five million dollars, which is about the amount we would’ve spent this week on advertising anyway. It certainly saves time coming up with some bullshit about how we’re working to help small businesses or some shit,” the spokesperson said.

In the advertisement Scott Morrison says “G’day, ScoMo here. We’ve totally run out of our own money now that Malcolm Turnbull isn’t around to donate millions of dollars to the campaign, so we’re going to use your money instead. Fair dinkum,” before pouring petrol onto a pile of five million dollars, striking a match and walking away.