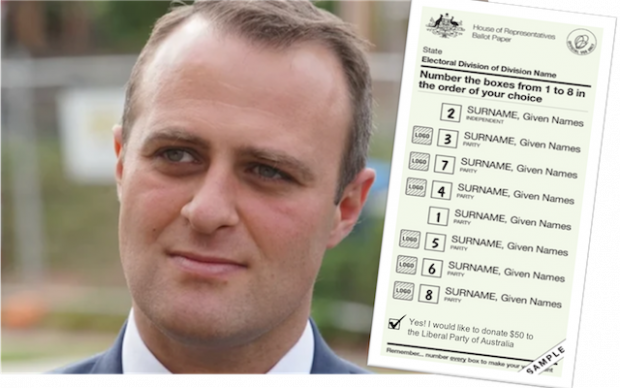 Voters in the upcoming election will have the option to donate to the Liberal Party when they fill in their ballot paper, in an innovative new system devised by MP Tim Wilson.

Under the new process, the House of Representatives ballot paper will now include a pre-ticked box to make it easier for voters to donate. The reverse side of the ballot paper will have space for the voters’ credit card details and other information.

Mr Wilson denied it was an abuse of the democratic process, saying people were free to un-tick the box if they wanted. “We’re not forcing people to donate. Of course their vote won’t be counted if the box isn’t ticked – that’s part of the new process. But it’s totally up to each individual if they want to vote or not”.

Mr Wilson said voters would now receive three pieces of paper when they arrived at the voting booth – a Senate ballot paper, a House of Representatives ballot paper, and a membership form for the Liberal Party.