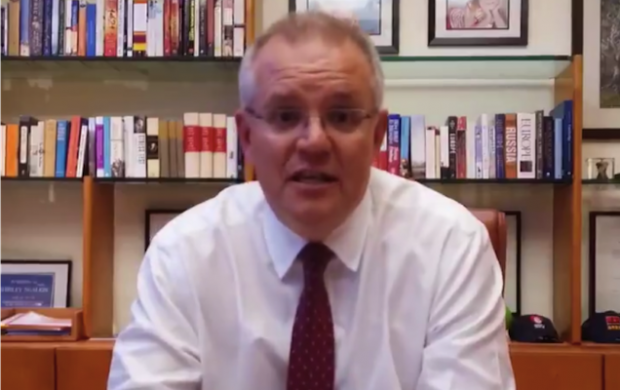 Scott Morrison here, your new PM. I’m getting in touch today because I want to tell you something really important. And that’s that I’m a regular, everyday, ordinary, average, fair dinkum, dinky di, down-to-earth true blue Aussie bloke on $400k a year, just like you.

In a moment, I’m going to tell you that I’m getting on with the job. But first, a bit about me. My Mum calls me Scott, but my focus group-tested nickname is ScoMo. Do you know any other 50 year-old men who refer to themselves by their nickname? Apparently it’s a deadset normal thing to do. Go Sharks.

Right now I’m travelling around Australia on a big bus talking to regular Aussies. ‘Bus’ of course is the term ordinary Aussie mums and dads use for VIP jets. And my VIP jet is about as fair dinkum Aussie as they come. Not like those VIP jets in the Canberra bubble.

As I’ve been travelling around this great country, a lot of people have come up to me in the street and said, “ScoMo, you’re just an average Aussie bloke who likes a beer and understands the unique pressures of life in middle class Australia in 2018”. Actually that may have been the briefing notes I put together for my image management firm. My mistake. But the point I want to make is that I walk in streets just like you. I had a beer in a street once.

I said before that I was going to tell you how I’m getting on with the job. Well, it’s simple. I’m travelling around the country putting in the hard yards, rolling up my sleeves, getting my hands dirty, getting down to business, trucking ahead, head down, bum up, getting on with things, having a crack, and getting on with having a genuine Aussie go at getting the job done. That’s how. It’s not rocket science when you think about it. Electricity prices.

So next time you see me around, come up and say g’day. I’ll be the guy wearing the cap that 57% of focus group participants said makes me seem more natural and approachable.