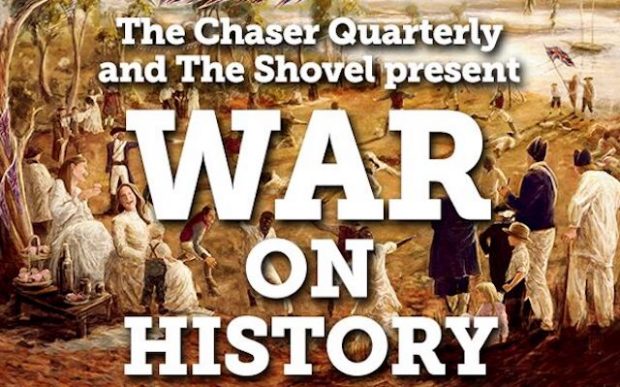 After a sold-out performance in Sydney, we’re excited to be bringing ‘The War on History’ to Melbourne. Starring The Chaser’s Charles Firth and Andrew Hansen, and The Shovel’s James Schloeffel, The War on History is a night a night of storytelling, fake insights and blatant historical revisionism.

How did Harold Holt really disappear? Was Alfred Deakin drunk when he suggested moving Australia’s capital to rural NSW or did he just lose a bet? And why is Melbourne slightly better than Sydney at everything?

Saturday 28th July at 8pm at The Village Roadshow Theatrette – a venue which is so cool that even people in Melbourne have never heard of it.

Hang on, I don’t live in Melbourne

No need to brag. But you may be interested to know that we do have a big national tour in the works for later in the year. Stay tuned for further details.

Is this show for me?

If you’ve always wanted to know more about Australia’s history but found the truth just a little bit too boring, this is the show for you.