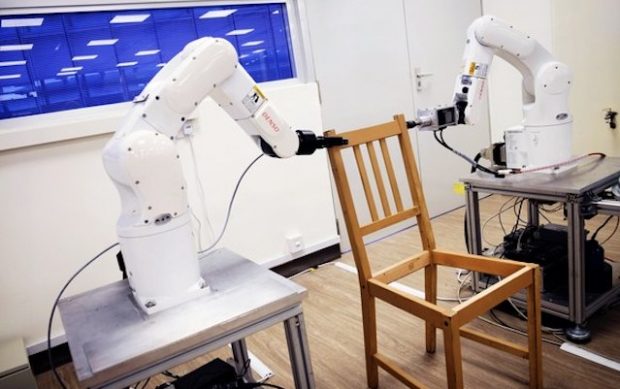 Citing ‘irreparable differences’, a pair of Singaporean robots who famously built an IKEA chair last week, has divorced, after the couple attempted to assemble a Liatorp Shelving Unit with doors. They had been together for 22 years.

While journalists around the globe hailed the assembly of the ‘Stefan’ chair as a landmark achievement, few stuck around while the couple – buoyed by the experience – decided to deck out their entire living area with Scandinavian flat pack furniture.

What began as an atmosphere of optimism and spirited teamwork quickly descended into hostility when the pair noticed they had screwed on a door of the 56-piece shelving unit back-to-front. Things unravelled rapidly from there.

“We kind of new the relationship was over when we realised all six shelves were nailed in up-side-down,” one of the robots said. “When Robert admitted he had lost the Allen key, I started divorce proceedings”.

The couple is now deciding who will take the Stefan chair, which has since been disassembled and is missing a leg.