CLOSE
The Nation
Revealed: How Tightarse Turnbull Used A Fake Baby To Smuggle Grog Into The SCG 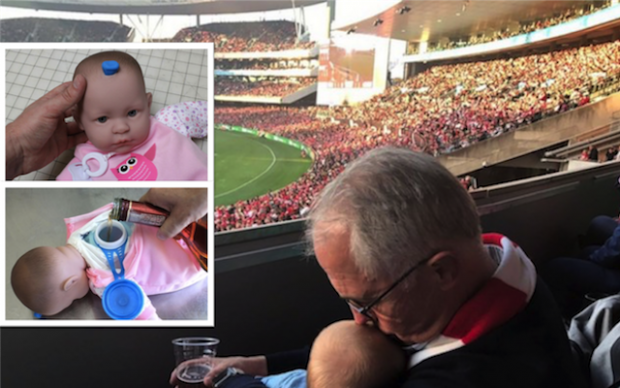 The image of the Prime Minister cuddling a baby and drinking a beer at the SCG actually exposes an elaborate ruse to smuggle hard liquor past security, The Shovel can reveal.

Analysis shows that Mr Turnbull is holding a baby doll, fashioned into a covert alcohol flask, with a small opening at the top of its head.

An investigator said that after days of controversy over the image, it was now clear that Mr Turnbull was diverting our attention by holding a mid-strength beer in a plastic cup. “He was actually sucking a 2003 Bordeaux through a concealed straw in the doll’s head”.

Thanks to Mr Turnbull’s own increased security measures, it’s now nearly impossible to get a bottle of alcohol into a football match. But the Prime Minister appears to have found a way around the measures. He also saved around $80 by not having to buy a second beer.

Mr Turnbull was unavailable for comment after the match and had a blood-alcohol reading of 2.1.