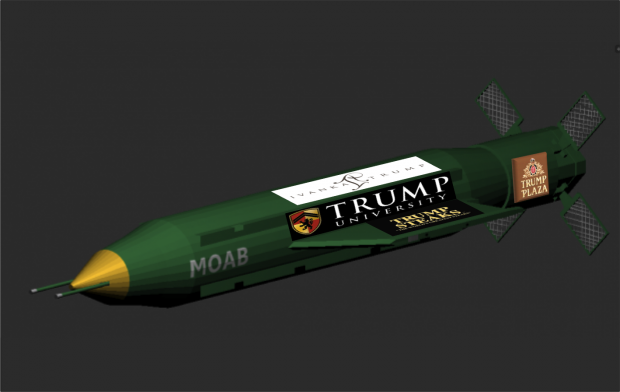 Saying he couldn’t believe no-one had ever thought of it before, US President Donald Trump today unveiled plans to buy-up advertising real estate on the nation’s missile arsenal.

The first missile – to be launched in Afghanistan later this week – will be fitted out with advertising for Trump University, Trump Hotels, Trump Steak and Ivanka Trump’s fashion line.

“You’ve got all this unused space on our missiles. So much space. It’s crazy! And it’s going so cheap!” Trump said. “I mean, people wonder why jobs are leaving the US”.

He said that although Afghani’s were probably not in a position to buy a Trump steak or an Ivanka Trump necklace just now, they could be in the future. “That’s what smart businessmen do. They think ahead,” he said. “So when we set up a Trump Hotel in Kabul in five years time, Abdul or Mohammad will say ‘oh yeah, I remember that. That was on that bomb that killed my family’. It’s memorable. It’s advertising that really stays with you”.