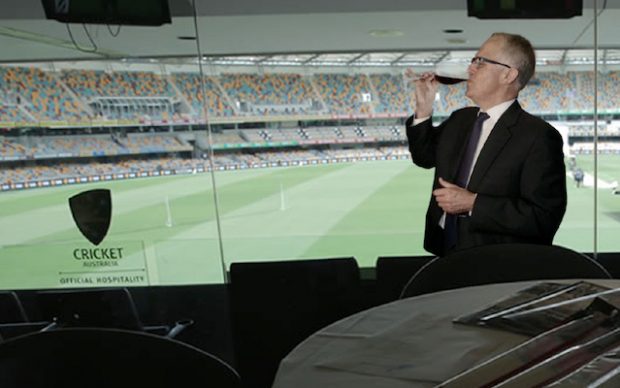 Malcolm Turnbull has gone one better than former PM Bob Hawke, downing a whole glass of reserve Barossa Shiraz-Grenache in just 18 sips, while watching the Test in Sydney.

It comes a day after Mr Hawke skolled a glass of beer at the same venue.

Cheered on by those around him, the Prime Minister took just 18 largish sips to drain the glass, only stopping to nibble on a bowl of hors d’oeuvres between gulps. The whole display lasted just 29 minutes, with Channel 9 covering the feat between balls.

Mr Turnbull said it took him back to his university days when he and his mates would sometimes rush through a bottle of Bordeaux without even decanting it first. “Yes, I probably missed some of the more subtle fruit and chocolaty notes. But sometimes you just need to throw caution to the wind,” he said.