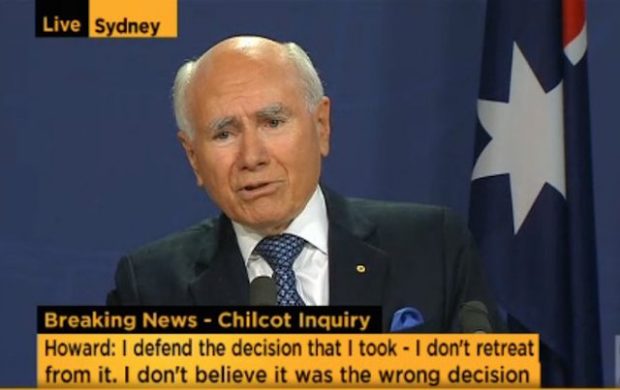 Former Prime Minister John Howard addressed the media today telling reporters he does not regret his decision to paint his face orange.

Mr Howard said he disagreed with the assertion that he had lied about tanning his 76 year-old face. “There was no lie. There were errors in intelligence but there was no lie,” he said.

“Were there mistakes in the way I applied the tan? Probably. Should I have thought more carefully about instinctively following the presumptive Republican Presidential nominee’s choice in face-colour? Perhaps. But that’s all very easy to say in hindsight. It was the right thing to do at the time”.

Mr Howard said while he respected people’s varying views, he stood behind his decision. “Of course I defend it. I don’t retreat from it. I don’t believe, based on the information available to me, that it was the wrong decision. I really don’t.”

In unrelated news, Mr Howard admitted his decision to invade Iraq wasn’t based on any intelligence at all.