CLOSE
The Nation
On The Campaign Trail With Richard Di Natale 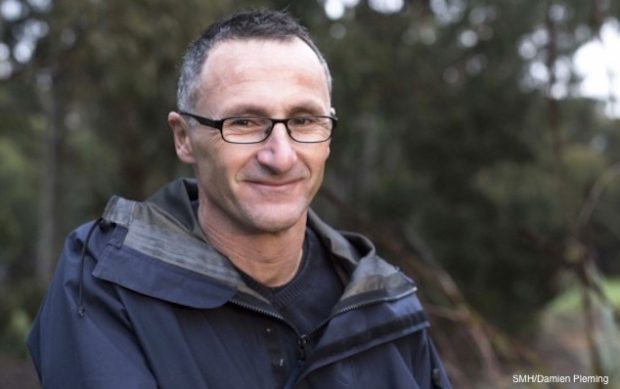 We’re 158km north-east of Melbourne on the highway towards Albury, and Richard Di Natale – leader of The Greens ­– has a flat. Sleeves rolled up, and with a spring in his step, he goes about fixing it himself. He’s nothing if not hands on.

It’s a minor hiccup in what has otherwise been a successful morning on the campaign trail. We’ve covered more than eight kilometres already today and it’s only 11am. Slow going some would say. But then, conducting an entire election campaign on a Black Pearl RD-140 pushbike is not without its challenges.

I’LL be honest, driving alongside Richard Di Natale in a Prius while he cycled from electorate to electorate was not what I had imagined when I dreamed of becoming a political journalist. But with the current state of the media industry, you take what you can get. And anyway, it’s given me a chance to see parts of this very specific part of north-eastern Victoria that I never knew existed.

“It’s about reducing the carbon footprint,” Di Natale reminds me, as he slips the bicycle tyre repair kit back into his pocket and reaches for the pump.

“I mean, the carbon emissions that Turnbull and Shorten will generate as they crisscross the nation by plane is enormous. It’s a joke. It’s totally irresponsible”.

He estimates the two party leaders will travel more than 40,000 km between them over the course of the campaign. Three weeks in, and we’ve come 284 km since we left Di Natale’s Otway’s property. 298km if you count the day we had to backtrack, chasing after an empty plastic water bottle as it blew away from us in the wind.

It is, as Di Natale says, ‘grassroots campaigning’. “We’ve had a chance to speak directly to dozens of potential Greens voters. And it’s only day 23,” he enthuses, as we pull back onto the highway.

Potential Greens voters like Bob McGuven who we met at the local pub in Euroa last night. A sheep farmer, Bob’s voted Liberal all his life, but Di Natale thinks he may have a swinging voter on his hands.

“Bob and I chatted one-on-one for two hours last night, and he really warmed to the Greens’ position. You see, once you talk to people you have a chance to explain the issues to them. I’ve pencilled Bob’s vote in”.

Later I call Bob to verify some details for this story. “What did you think of Richard?” I ask.

“A lovely bloke, and generous too. Not at all what you’d expect from a politician,” Bob says.

“Will you vote for him?”

“Not a fucking chance”.

AS we pass Violet Town, population 1,084, it seems as if Di Natale’s puncture may be more serious than first thought. One of the spokes seems to be bent, which is affecting the steering. But Di Natale is determined to carry on. This is an important election campaign, he reminds me.

And anyway, Di Natale’s Chief of Staff Cate Faehrmann (who’s made the journey by bike as well) is determined to make it to the electorate of Fenner in the ACT by next week. The Greens have a chance to improve their vote there, she says, and time on the ground could make all the difference.

We push on, singing 99 bottles hanging on the wall (but replaced with the words ‘499km, until we get to Fenner’), to keep our spirits up. Di Natale provides regular updates on how many tonnes of carbon we’ve saved, using the Carbon Saving app on his phone.

Two hours and 17 km later, at Faehrmann’s insistence, we stop. She says she’s got something important to tell us. “Just got new polling results in,” she announces, holding up her phone.

“Bad news is, Fenner is a lost cause – no way we’ll win there now. But the good news is Wannon in western Victoria is now in play”. She gets back on her bike, turns around and starts cycling in the opposite direction, gesturing for us to follow.

I’m speechless. Wannon is 400km in the opposite direction. “Ah well,” Di Natale says, gently smiling as he rides past the Prius. “That’s politics!” He rings his bell, and pulls out back onto the road.

Back in Euroa, and things with Di Natale’s bike have gone from bad to worse. We diagnose that the problem is actually now with the fork. It’s been bent out of shape, and it’ll need replacing if we’re to get to Wannon before the election.

Faehrmann makes some calls to bike shops in the area, but it’s quite a specific part, and none have it on hand. Eventually she finds a shop in Shepparton that can send the part down to Euroa the following day. We spend the night in Euroa again, and catch up with Bob McGuven again for a beer.

The bike part doesn’t arrive the following day, or the day after that. But Di Natale remains chipper. By day three he knows most people in the town by name.

“Well at least we can count on the vote in Euroa!” Di Natale says to a group of local farmers on the fourth night. There’s an awkward murmur. Bob and I look down at our beers.

On our fifth day in Euroa, Faehrmann gets a phone call from the bike shop in Shepparton.

“Good news bad news,” she tells us. “The part’s arrived, which is great.”

“They had to fly it in from Denmark,” she mumbles quickly.

“They had to fly the part in from a specialist factory in Copenhagen Denmark,” Faehrmann says, still avoiding eye contact.

There’s a prolonged silence. Then I accidently say aloud, “Shall we check the Carbon Counter app?”

Di Natale walks slowly out of the pub. He doesn’t talk for the rest of the day.

THE following week is less jovial than the previous few. The optimism is still there, but you sense the edge has been taken off.

There are some highlights – we bump into Malcolm Turnbull who’s on a fly-in fly-out campaign visit to Seymour. And Di Natale eventually comforts himself with the fact that – notwithstanding the spare part being flown in from northern Europe, and despite the fact that I accidently had the Prius on high-performance petrol mode the whole time ­– we’ve still come in at well under the carbon miles of the two major party leaders. Which is, as Di Natale points out, a good news story for the media.

In the end, we do make it to Wannon. But unfortunately by then the polls are saying it’s a lost cause for The Greens. On the plus side, there’s been a spike in support up in northern NSW. Di Natale and Faehrmann make plans to head there, but I won’t be travelling with them. I’ve been assigned to follow the Bullet Train for Australia Party for the final weeks of the campaign.

On my last day on the trail we head to the pub for a farewell meal. The news is playing on the pub TV, and – as luck would have it – there’s a story about the relative carbon footprints of each of the leaders’ campaigns. According to the graphic, Di Natale’s footprint is strangely much bigger than the other two leaders.

A voiceover explains the unexpected result. “Turnbull and Shorten have cleverly bought carbon offsets this election year to bring their net carbon footprint down to zero”.

Di Natale looks at his tattered bike, propped up next to the bar, then over to Faehrmann. “Fuck. If only we’d thought of that”.

Buy the Chaser Quarterly for more must have election coverage like this.