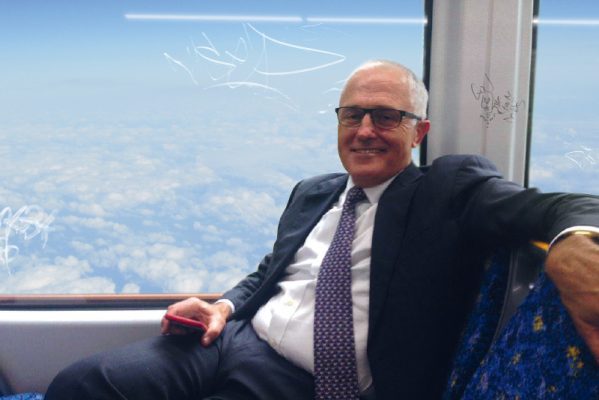 I’m sitting on a Sydney train seat, bright blue save for the large stain that has dried into a patch across the fabric. Blue grab-handles dangle above my head, and the seat’s wonky springs jolt me occasionally as we travel along. Behind me, dozens of journos and staffers perch on other seats, or stand in the aisle. Photographers are finding every angle they can.

Their object of obsession? The Prime Minister of Australia, Malcolm Turnbull. His face beams with a pride that belies his humble surroundings.

“It’s the train of the future!” Turnbull announces, to the laughter of the assorted entourage.

Liberal Party pollster Mark Textor explains that the image of the Prime Minister commuting to work using public transport does wonders for his likeability. “It makes him relatable and directly addresses Turnbull’s key perceived weakness, which is that he is a rich wanker.”

On the advice of Textor, Turnbull’s campaign has made getting a photo-op on public transport the top priority of his campaign, above even policies and haircuts.

But how do you fit a slow journey on an over-crowded vehicle that uses centuries-old technology, into the gruelling schedule of a modern campaign?

The answer is, you don’t.

Instead, Textor turned to the services of New York firm International Jet Interiors, along with some of Hollywood’s top set designers, to conduct a very special kind of makeover on Turnbull’s own private jet.

Over the course of one weekend in early May this year the Prime Minister’s jet was transformed into a humble Sydney train.

“Our brief was simple,” says Danny Alcroft, who led the makeover. “Take a conventional corporate jet and give it a totally ghetto vibe. Lucy wrote the brief.”

The key to the makeover was authenticity. A broken spring inside each seat means that Malcolm never looks truly comfortable on board this train no matter where he sits. “It’s very realistic,” Alcroft claims.

They have even gone to the trouble of modifying the jet’s speaker system to sound more like a Sydney train. When the pilot updates us on the weather patterns in Port Douglas (where Turnbull has been campaigning on the issue of holiday-home affordability) and then Mount Buller (where he will address a crowd of locals on the burden that penalty rates place on the cost of chalet maintenance) we can’t understand a word he says.

Once the carriage-look was finished, the team employed an acne-ridden teenager to spend an entire night in the train chewing gum, and placing the used pieces strategically around the carriage. “It was masterful,” says Alcroft. “It’s almost impossible to touch any surface without running into one of his gems. I think he urinated on one of the seats too, because the whole carriage smells exactly like the Gosford terminator.” 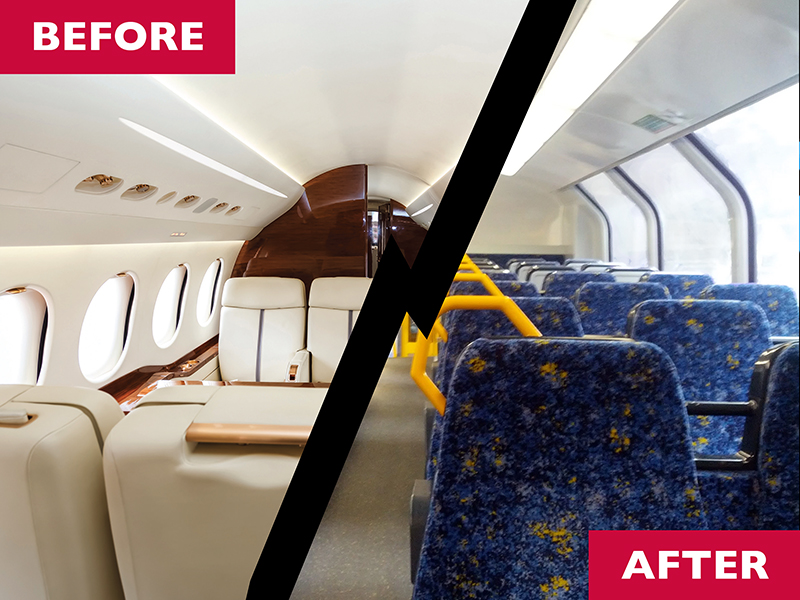 When Malcolm Turnbull first took the plunge into politics back in 2004, he knew there would be sacrifices.

“With any project,” he explains over the dull roar of the vehicle. “You know there will be sweat and tears for your staff. You know that they’ll be putting in long hours and that there’ll be plenty of missed birthdays and even Christmasses if they’re to get what you need done. Their marriages will suffer, some will suffer depression, others will burnout entirely.”

“The difference is that in public life, those burdens are expected to reach beyond your staff, all the way up to you.”

Turnbull turns for a moment to his wife and confidante, Lucy. She gently squeezes his hand, forcing a smile.

He gives me an example of just one of the sacrifices the couple have had to make. “When we won Wentworth, we realised immediately we couldn’t have our recycling bin overflowing with empty Grange bottles. The risk of a journalist from some muck-racking rag like the Financial Review rifling through our bins for the sake of a few column inches was simply too great.”

Instead, arrangements have been made with Treasury Wines Estate (the owners of Penfolds) to re-label Turnbull’s Grange collection with a selection of mid-range brands. “St Henri, Bin 389 that sort of thing.”

“For some reason,” Turnbull shakes his head at the absurdity of it all, “people want a Prime Minister who only spends $60 on a bottle of wine. I mean, is that really what they aspire to?”

Lucy interrupts. “My theory is that it all goes back to the convict era. It’s like a hangover from the early days of the colony, when everyone’s skills were required, which inspired an egalitarianism between the governors and the governed.”

“Exactly,” says Malcolm, nodding his head. “It’s a corrosive egalitarianism that rewards hard-work over charm and natural talent. At Sydney Grammar it was exactly the opposite.”

As Turnbull squeezes past to speak to other journalists, Textor tells me of the many advantages of the jet makeover. Firstly, he says, it means Turnbull can have a public transport photo-op every day, while steering clear of voters who carry the risk of unwelcomed opinions or disease. Secondly, it makes it very difficult for protestors and undergraduate stunt comedy groups to infiltrate. “Have you ever tried interrupting a door-stop at 30,000 feet?” he asks. Thirdly and most importantly, Textor says it makes Turnbull look like one of the people, even though he is 10 kilometres above them. “No other world leader has managed that,” he beams.

Another muffled announcement comes over the loudspeaker, and the bustle of staff makes it clear the flight is about to land. As the press pack settles down into the carriage’s seats, Alcroft beckons me over to a small nook that juts out of the bottom of a wall at the end of the carriage. There, Alcroft proudly shows me his ‘coup de grace’ scratched into the plastic veneer. It simply reads ‘Abbot sux cocks’.

“That was a personal request,” admits Alcroft.“From Lucy.”

Buy The Shovel and The Chaser’s special election guide for just $20.