CLOSE
Australia Only Has One Real Choice This Election, Tony Abbott 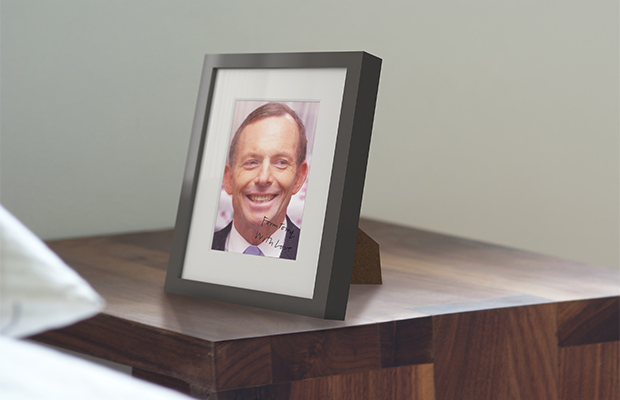 So what you do is you take your ballot. Draw a diagonal line across it. And write ‘Tony Abbott’. In big letters. As big as the man’s heart.

Is it a crime for me to tell you to spoil your ballot? Maybe it is. But it’s a crime to cut down the best prime minister we’ve ever had. And Malcolm Turnbull walks free.

Which was a good idea when Malcolm Turnbull was leader. It’s complicated. But you know who isn’t? I know who isn’t. I know him well, because we often share a meal. Tony Abbott.

Imagine your house is on fire. Then the doorbell rings and it’s a politician at the door. Which politician would you want it to be? Tony Abbott. He’d pitch in. Wouldn’t want any cameras, and would say so on camera. Until there was a good take. Just get the job done. Tony Abbott.

And if your house was in the Davidson RFS district, that’s who you’d get. Tony Abbott. In a yellow fireproof suit. Because he shows up.

His wife wanted him to retire, you know. So did all three daughters. But he didn’t listen. He was Minister for Women, he knows what’s best for them. Tony Abbott. Shows up even when not wanted.

He kept going. Even though the polls showed that most voters in Warringah thought it was time to retire. He doesn’t retire. That’s not what Tony Abbott does. Even if it jeopardises the party’s chances. He’s a selfless guy, Tony Abbott is. Serves his country. Even when that means serving himself.

What if it isn’t your house that’s burning, but Australia’s burning? With the flames of a budget emergency. Also literally burning because of climate change, some would have you believe, but they’re wrong. I know and Tony Abbott knows.

Who else can solve the budget emergency? Not Labor. They created such a big emergency that Tony Abbott had to raise the debt ceiling just to solve it. And even though he knew he’d get criticised for it, called a hypocrite because the deficit blew out even further on his watch, he did it anyway, because that’s the kind of guy he is. It’s called being a good bloke. The best bloke. Tony Abbott.

Australia, you made a big mistake with this one. It breaks my heart. But mark my words, it will break yours, too. Literally break it in two when ISIS come for you, or that madman Vladimir Putin, because the only one strong enough to stand up to them is Tony Abbott.

On July 2, Australia will face a choice. Not the right choice, because it’s not a choice involving Tony Abbott. But in a way, it still is, if I want it to be. Which I do. You know who to choose, Australia. Tony Abbott.