CLOSE
The Nation
‘The Time For Playing Games Is Over’ Turnbull Says, Asking Crowd To Pick A Card, Any Card 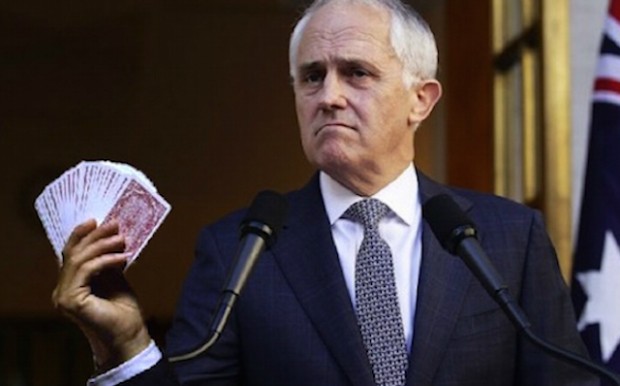 Today Prime Minister Malcolm Turnbull paved the way for a double dissolution election. Here is the transcript of his speech.

“Well thank you all for coming at such short notice. This is a serious issue as you know. Let me just start by saying that the time for playing games is over. Which is why we will bring forward the Federal Budget to 3rd May. Now, if you could choose a card from this pack – it’s a standard deck, nothing special about it, as you can see. Any card. Great, thanks.

Now it’s important that we bring forward the Budget, because in the case that there’s a double dissolution election on 2nd July, Mr Shorten will need to be allowed to deliver his budget reply speech, as is the convention. That would not be possible with a May 10 Budget. Before we move on, could you please just make a mental note of your card and then place it back anywhere in the deck. Anywhere you like. That’s right, thanks.

What’s that? Yes, Mr Morrison did say just one hour ago that the Budget would definitely be on May 10th. But he had the wrong information.

Now of course the Senate can avoid this double dissolution. All it needs to do is pass the Australian Building and Construction Commission legislation. It has refused to pass this in the past, and I refuse to be held hostage by this parliament. Sorry what was that? Oh, it’s just some building regulation thing. Would you mind just shuffling this for me? Give it a good shuffle.

Look, I would naturally prefer not to have to dissolve both houses of parliament, but this has been forced upon me. Is this your card? Wonderful – isn’t that just neat. No, I won’t be taking any questions. Thank you”.