CLOSE
World
Heartbreaking: Jeb Bush May Never Get To Play With The Little Piece Of Iraq His Father & Brother Left For Him 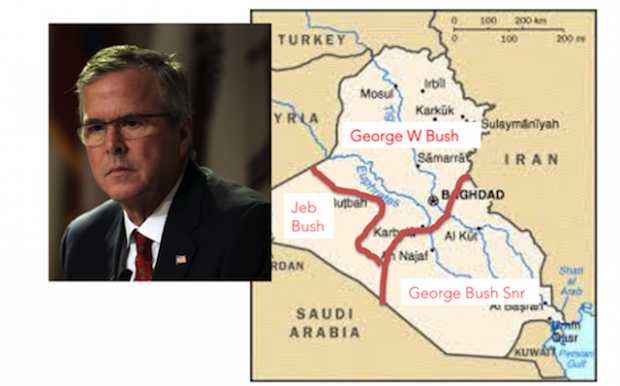 When Jeb Bush – brother of George W, son of George Snr – pulled out of the race for President this week, he left many things behind. Not least, the opportunity to muck around with the piece of Iraq that his father had set aside for him twenty five years before.

George Bush Snr said it was a sad day in the Bush family. “I’ve always treated my sons equally. So when I withdrew from Iraq in the early 90s, I left a piece for each of the boys to play with later on. Little George Jnr had so much fun pulling his piece of Iraq apart and trying to put it back together again. It’s just such a pity that Jeb won’t get that same opportunity”.

George W Bush said he had been careful to leave Jeb’s part of Iraq untouched. “I messed around with most of Iraq in my eight years. But I was always careful not to touch Jeb’s little piece. Jeb loves guns. So I just knew it would been something he would love to blow up when he himself became President. Unfortunately that’s not to be”.

Jeb Bush was said to be inconsolable. “He’s worried Donald Trump is going to go in there and demolish his piece of Iraq without any thought for the history of the place”.