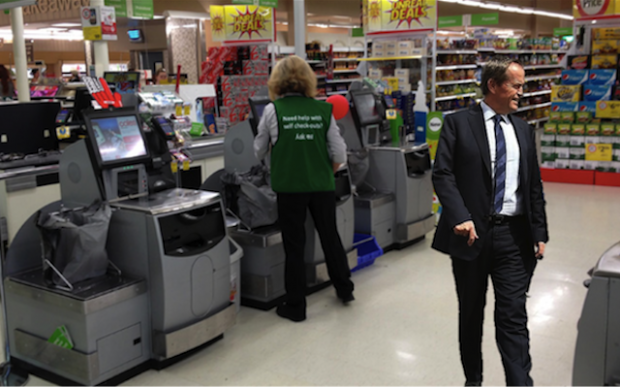 After running out of conversation with humans, Bill Shorten finished up the second day of his three-week tour of supermarkets talking to a Woolworths self service checkout facility.

Saying he was happy to talk to anyone who would listen about a potential 15% GST, an upbeat Shorten later said he thought the two had got along well. “I asked him what he’s favourite type of lettuce was, he said if I have a Woolworths Reward card I should scan it now. It was a real meeting of minds,” the Opposition Leader said.

After using up all his small-talk lines with regular shoppers, Mr Shorten approached one of the free checkout machines and said, “Hi I’m Bill Shorten. I’m here today to put pressure on Malcolm Turnbull to drop the 15% increase to the GST, which will put up the cost of things like fruit and vegetable. I think it’s a dumb idea”.

The machine replied by saying there was an unexpected item in the bagging area.

Part way through the conversation, Mr Shorten had to call for help after the machine said he would need to seek approval.

The Labor leader said he was happy to go to every supermarket and speak to every self-checkout machine about the potential rate rise. “I think I’ve got a captive audience”.