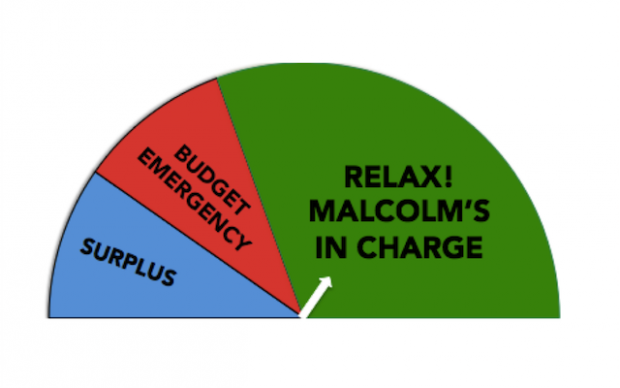 The Federal Government has launched a new system for ranking the threat of budget danger, which it says is clearer, simpler, and easier for Australians to understand.

The new system will contain just three levels: ‘Surplus’, ‘Budget Emergency’, and ‘Relax! Malcolm’s In Charge’. It comes as recent forecasts suggest this year’s budget deficit could balloon to $40 billion.

Treasurer Scott Morrison said the new system was overdue. “Under the Howard Government we had surpluses, under the former Labor Government we had Budget Emergencies, so it’s fair enough for Australians to ask how to label the current scenario,” he said.

Mr Morrison said providing dollar amounts was confusing when talking about the budget. “’Relax, Malcolm’s In Charge’ provides all the information you need to know, without getting into the pesky details of actual dollars and cents”.

Mr Morrison said he expected the current level to be in place for the foreseeable future. “It has my full, ongoing support”.