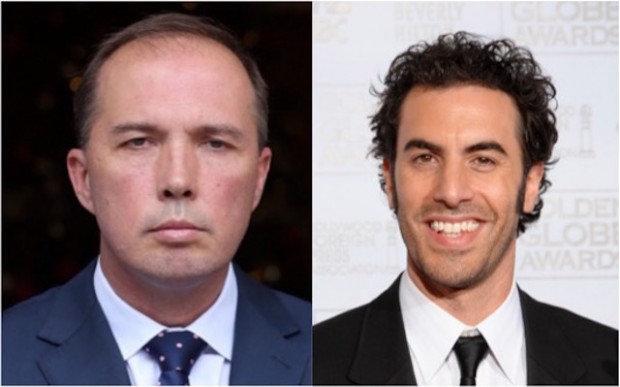 The ‘Minister’s’ true identity was outed at a promotional launch event for Baron Cohen’s upcoming movie Much Ado About Dutton.

The controversial British star – whose previous characters include Borat and Ali G – went undercover for over a year, conning media commentators, the general public, and Tony Abbott into thinking he was a former policeman from Queensland. But in reality it was the skillful Baron Cohen pulling all the strings.

As with Baron Cohen’s other characters, ‘Dutton’ pushed the limits of good taste in order to provoke a response. “Getting Border Force to demand to see people’s papers, joking about Pacific Islands being swallowed by climate change, the $7 GP co-payment – these were great gags. I can’t believe how far we were able to take them,” the Bruno star said at the launch today.

Baron Cohen said he thought his cover might have been blown last month when he commented that the ABC and media corporation Fairfax were waging ‘a bit of a jihad’ on the Government. “That’s when I thought I might’ve pushed it too far. Who says stuff like that!”. But the joke went by unnoticed.

Much Ado About Dutton will now go into editing, with a release date set for February 2016.