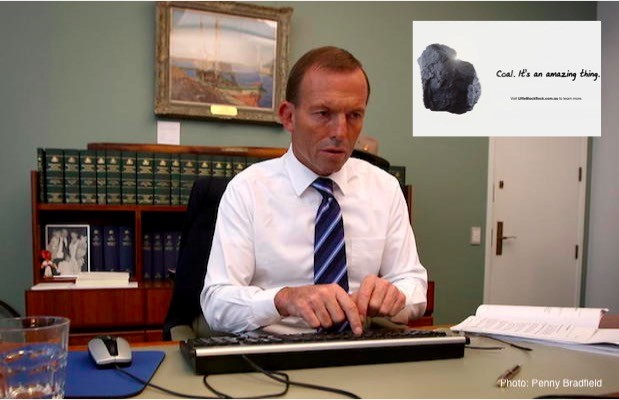 Prime Minister Tony Abbott has spent most of the past two days watching the coal industry’s TV commercial on high rotation.

The commercial, which shows close-up footage of a pristine piece of coal, has become an instant hit in the Abbott office.

“It’s been hard to get him to concentrate this week. It’s always just, ‘One more time’, or ‘Wait! This is my favourite bit!’” a frustrated staffer said. “He’s even managed to find a way to watch it in slow motion”.

Another staffer said Mr Abbott also regularly watched the video on his phone. “He’ll say something like ‘I’m just ducking out to get a coffee’, or ‘Just got to check a few messages'”. But we all know he’s sneaking off to watch the coal video in private. Productivity has dropped significantly,” she said.

At publication time the commercial had been viewed 38,000 times on YouTube. “32,000 of those are from the Prime Minister’s office,” the staffer said.