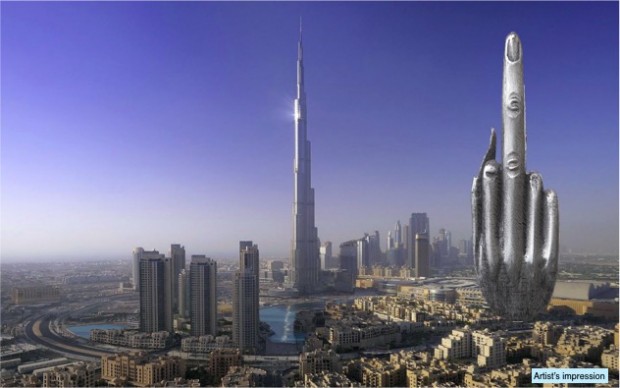 The rich gulf city of Dubai is once again set to dazzle the world, this time with a giant 880 metre middle finger dedicated to those fleeing nearby countries.

The 200-story structure, to be built next week by 20,000 underpaid Indian workers, will join the growing list of attractions in the United Arab Emirates city.

Noting that the structure will be the biggest dismissive gesture in the world, a spokesperson for Dubai Tourism said the building will feature shopping malls, an indoor ski field, and a luxury hotel. “The highlight for many will be the seven-star restaurant at the top of the middle finger, with views stretching as far as Syria,” the spokesperson said.

But the height record may be short-lived, with nearby Saudi Arabia today announcing that it has its own plans to build a giant middle finger, possibly as tall as 900 metres.

Neighboring Qatar meanwhile said it was considering plans to offer temporary shelter to asylum seekers, possibly underneath 20 spare Ferraris no longer in use.